The secret of the confessional? The Royal Commission.

Posted on March 26, 2018 by interfaithashram

The secret of the conf 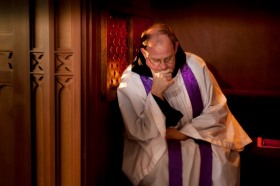 Today’s Gospel tells us that John the Baptist came as “a voice crying in the wilderness”, crying out the good news, announcing that someone was coming, someone so great that even he, John the Baptist, was not worthy to be his servant and undo the strap of his sandals. The Baptist gives no further details, but in the first reading the prophet Isaiah tells us that the one who is coming will “bring good news to the poor, bind up hearts that are broken, proclaim liberty to captives and freedom to those in prison”. (Is 61:2) This teaching is at the centre of our Christian life; we are suffused with the good news of Jesus Christ and we listen joyfully to it.

Yet, just yesterday, 16 December, we heard bad news. The report of the Royal Commission into Child Sex Abuse was delivered to the Governor General. It tells of the incredible number of cases of abuse perpetrated by priests and religious, men and women, over months and years. We listen with horror; we are appalled at what has been done. Moreover, we have also heard of the failure of our leaders to believe the complaints of the victims. They were not listened to. Rather, the perpetrators were given the opportunity to go on and commit more crimes.

The Report contains some 189 recommendations. Two of these have been highlighted by the media. Firstly, that any reporting of abuse during confession must be reported by the priest to the authorities; and secondly that the Church should abandon the practice of compulsory celibacy. With regard to the celibacy: it could be changed with a stroke of the pen. Time and pastoral prudence will tell what must happen here. With regard to the other: it is not possible to break the seal of confession, for this would be sacrilege. But what comes under the seal of confession?  There are different opinions in this regard. It is important to note, nevertheless, that the priest is not obliged to give absolution. He can refuse if necessary. He could, for example, require the person first to confess to the police and suffer the consequences. Given the many aspects of this difficult matter, priests need to be given further instruction and education. There are no easy answers.

We have heard the good news. Listening means speaking. Those who hear good news will wish to speak up for those who are unable to speak. We are the voice of the voiceless. We speak for the those reduced to silence. We speak up and become their voice.  We speak up and cry out against injustice in all its forms.

John the Baptist tells the people that the Christ stands among them but unknown to them. He stands among us but not unknown to us. He always stands among us, he is always present to us. We have been sensitised by the Gospel, the good news, and so we are enabled to listen more and more deeply; we hear him more and more clearly, as we listen in depth. We take pleasure in hearing his voice in each other’s voice. We take pleasure in hearing each other’s voice in his voice. There is one Voice.

In the reading from the First Letter to the Thessalonians St Paul tells us to be happy at all times. Even though we have been shocked and deeply saddened by the sorry tale of abuse, we are still able to be happy since our happiness comes from him and from each other who are with him and in him.

Isaiah goes on to say that, “the Lord will make both integrity and praise spring up in the sight of the nations”. (Is 61:11) Happiness gives birth to happiness.

1 Response to The secret of the confessional? The Royal Commission.