Praying together? a solution to a vexed question

Posted on April 8, 2016 by interfaithashram 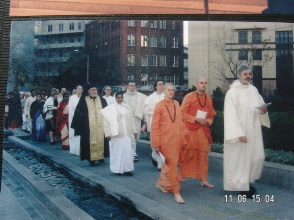 “Praying together: a solution to a vexed question”

In short: “Does the definitive inability to express prayers together – ‘praying together’ – in fact constitute part of the solution? Is the paradox of interreligious dialogue a means of opening onto the transcendent sphere, which exceeds all human limitation? Yes! Interreligious dialogue leads us to the highest form of prayer, namely the act of adoration when we are identified with the One whom we adore. … There is therefore no separation either between us and the One, or between participants in inter-religious prayer in the moment of deepest union, all made one.”

On Tuesday 8 December 2009 Parliament of the World’s Religions, Melbourne Rev. Dr. John Dupuche joined with Rabbi Ralph Genende and Ms Di Cousens to speak on the topic “In times of happiness, in times of sorrow: Praying together, an on-going vexed question.”

John Dupuche’s contribution was as follows:

Adoration may lead to words of praise which are always inadequate, and in this way are a limitation. The words of praise depend on the insights and theologies of our respective traditions.

However, a closer examination of the prayer which Jesus Christ gave to his disciples shows a different emphasis. It is structured basically into two sets of three petitions.

The first set of three effectively expresses the same petition, namely ‘Your will be done’, repeated in three different ways. Thus, the petition is not a question of ‘my will’, but ‘your will’, that it is God’s will, being done. It is not a question of satisfying my wants and needs, no matter how urgent. One person may pray for fine weather for the fete, another may pray for rain for the growing crops, but primarily both should say, ‘Thy will be done’. It is a question of being in a state of union with the divine will, having one mind and will with God.

It is worth noticing that the normal grammatical form of petition in Christian prayer is in the imperative form. In the Lord’s Prayer we read: ‘Thy kingdom come, thy will be done.’ Again, in the Eucharistic Prayer the petition is not phrased in the form ‘we ask you to remember those who have died’, but ‘remember those who have died!’. Thus the petition is made with supreme confidence. It has a sense of power, in the same way that in the Book of Genesis God says ‘Let there be light, and there was light’. Prayer is not a pleading or cajoling.   It is made in that faith which moves mountains.

This is shown explicitly in Jesus, the means and model of Christian prayer, when, just before he raises Lazarus from the dead, he prays:

Father, … I knew that you always hear me, but I have said this for the sake of the crowd standing here, so that they may believe that you sent me. (John 12.41-42)

He has this confidence because he is of one mind and will with God; indeed he is of one being with God. Similarly, his disciples are to be one with him and with each other, agreeing on their prayer. Christian prayer is always in relationship to the community.

His teaching is a constant call to confidence: ‘Those who seek always find, those who knock always have the door opened to them.’ (Luke 11.10)

The diversity in theologies and rituals is so great we might not be able to join in saying the same words or performing the same actions as others might do; and we know that words and actions, as the external expressions of one’s belief, are vitally important. There could be a feeling of compromise or contradiction of one’s own tradition if we were expected to accept each other’s words. We may not be able to express the words of praise since our theologies differ. This is even more true when it comes to petition and repentance, for our needs in this regard differ from person to person, group to group.

Does the definitive inability to express prayers together – ‘praying together’ – in fact constitute part of the solution? Is the paradox of interreligious dialogue a means of opening onto the transcendent sphere, which exceeds all human limitation? Yes! Interreligious dialogue leads us to the highest form of prayer, namely the act of adoration when we are identified with the One whom we adore. The ancient teaching on the divinisation of the Christian provides the solution. There is therefore no separation either between us and the One, or between participants in interreligious prayer in the moment of deepest union, all made one.

In other words, the moment of silent union with the Transcendent is the moment when members of different traditions ‘pray’ together. This is in accord with the most classical Christian teaching on adoration.

Rev. Dr. John Dupuche is a Roman Catholic Priest, a senior lecturer at MCD University of Divinity, and Honorary Fellow at Australian Catholic University. His doctorate is in Sanskrit in the field of Kashmir Shaivism. He is chair of the Catholic Interfaith Committee of the Archdiocese of Melbourne and has established a pastoral relationship with the parishes of Lilydale and Healesville. He is the author of 'Abhinavagupta: the Kula Ritual as elaborated in chapter 29 of the Tantraloka', 2003; 'Jesus, the Mantra of God', 2005; 'Vers un tantra chrétien' in 2009; translated as 'Towards a Christian Tantra' in 2009. He has written many articles. He travels to India each year. He lives in an interfaith ashram.
View all posts by interfaithashram →
This entry was posted in Interfaith prayer. Bookmark the permalink.