Posted on August 2, 2016 by interfaithashram

Vijñānabhairava-tantra, verses 52-53   consuming all by fire 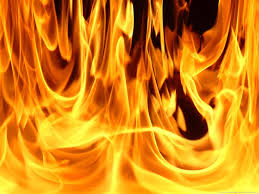 “One should focus on one own ‘fortress’ as though it were being consumed by the Fire of Time rising from the foot; then, finally, the peaceful state will arise.” (52)

“In just the same way, by meditating imaginatively on the whole world as being consumed by fire, the man whose mind is indifferent to all else will arrive at the highest human state.” (53)

In the Vedic sacrifice, the most ancient of Hindu sacrifices, offerings such as wood, ghee or incense are placed in the fire, which consumes them and takes them upwards to the heavenly realm, in which Agni (fire) is one of the principal gods. The ashes that are left over are a symbol of the ultimate Reality from which all comes and to which all returns. Thus ash is perfectly pure, and when it is smeared over the body transports the person into pure consciousness.

The Sanskrit word citi can refer both to consciousness and to a funeral pyre. In the way that a pyre is consumed by flames, so too all limited expressions of reality are consumed by consciousness. The fire of consciousness bring all things to their end. It is ‘the Fire of Time’ (kālāgni).

According to Kashmir Shaivism, the body is seen as a city (puram), indeed as a microcosm of the macrocosm. Every level of body, from the lowest to the highest, is linked to another world. In transforming one’s body by the process outlined in these ślokas the practitioner transforms this whole cosmos and indeed universes beyond this universe.

The practitioner consciously moves up every level of his body, with the sense of it being consumed and being absorbed into the fire of consciousness. This act is done with full awareness (vicintayed). All that is unconscious is both appreciated and transformed. It is not rejected but changed, given a value and a dimension it did not have, giving it a brilliance and energy it did not know existed. Consciousness transforms all into consciousness. The purpose of existence has been achieved, and so in the end (ante) there is stillness (śāntābhāsas).

The śloka 53 broadens the scope by applying the same practice to the whole of reality (jagatsarvaṁ). The practitioner uses his imagination (vikalpataḥ) to meditate (dhyātvā) on the universe as being burnt up (dagdhaṁ). As a result the man (puṁsaḥ) who performs this act becomes the ‘supreme man’ (pumbhāvaḥ paramo), i.e. the meditator reaches the fullness of the human condition.

The act of Christ’s incarnation is to enter into a world that is ignorant of revelation, and bereft of glory. It is out of love that he comes, he is consumed by love and consumes all in love.

Jesus, after he has been scourged, crowned with thorns and clothed in purple robes is presented to the people as the ‘human being’, “Behold the Man” (anthrôpos). He has achieved, in his utter debasement, the fullness of humanity. He is the true human, the supremely human, indeed the God-man. Jesus draws all to himself and transforms all into his very being. There is one perfect Man. (Eph 4:13)

That is why, when he rises from the dead, the tomb is completely empty. There are no traces left, no hair or finger nails as in some accounts in the Hindu tradition. There is no ash left, as in the Vedic fire with wood. He is totally consumed by his love. And in turn, his love transforms all things; for love is a great fire. Ultimately all is love.

Jesus speaks of bringing fire to the earth. (Luke 12:49) This is destructive not in the sense of burning things up, but on the contrary in the sense of eliminating all divisions and contradictions. All is taken up in the fire of the Spirit. Jesus is the first fruits of this process; he is completely consumed. In the end all things will be love, loving, lovable, in love, finding love, seeking to be loved, welcoming love. Every plant and grain of sand, every memory and dream, every animal and every star will be liked, appreciated, fully known, energized, made soft and welcoming.

Abhinavagupta will say in his commentary on the Parātriṃśikā[1] that by focusing on ‘he’, ‘she’ or ‘it’, in other words on whatever is limited, these become ‘you’; and by focusing on ‘you’, the ‘you’ becomes ‘I’. Thus the whole world is transformed into the supreme ‘I am’.    This resonates with the episode in the Book of Exodus where God addresses the people he has brought out of Egypt and taken to himself. They are no longer a crowd of individuals, but a people whom God addresses as ‘you’. “You are my people”. They are the object of his love. He had declared himself as ‘I am’ when he spoke to Moses from the burning bush. (Ex 3:1ff.)

Rev. Dr. John Dupuche is a Roman Catholic Priest, a senior lecturer at MCD University of Divinity, and Honorary Fellow at Australian Catholic University. His doctorate is in Sanskrit in the field of Kashmir Shaivism. He is chair of the Catholic Interfaith Committee of the Archdiocese of Melbourne and has established a pastoral relationship with the parishes of Lilydale and Healesville. He is the author of 'Abhinavagupta: the Kula Ritual as elaborated in chapter 29 of the Tantraloka', 2003; 'Jesus, the Mantra of God', 2005; 'Vers un tantra chrétien' in 2009; translated as 'Towards a Christian Tantra' in 2009. He has written many articles. He travels to India each year. He lives in an interfaith ashram.
View all posts by interfaithashram →
This entry was posted in Christian tantra, Hindu Christian relations, Interreligious dialogue, Kashmir Shaivism, Vijñānabhairava-tantra. Bookmark the permalink.